My favourite British spider – at least in theory, never having seen one – is the ultra-rare Ladybird Spider, of which I found a picture to illustrate a previous posting – here’s another: 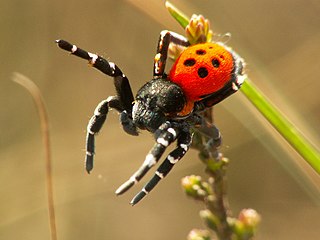 Now, looking at this fine specimen on my screen led me to go surfing to find out a bit more about its current status. I first learnt of this splendid, if scarce, creature over 20 years ago, reading W.S.Bristowe. Then, it bore the comely name of Eresus niger (Petagna, 1787), a reference to the entirely-black female. By this name I still think of it. However, I’m aware that perhaps ten years ago, or maybe more, it changed its name to the far more cumbersome but no doubt more accurate Eresus cinnaberinus Walckenaer, 1805 (not sure why the change to a later attribution). I never really caught up with this, as it’s not really a name that one drops into every-day conversation – especially if you can’t spell it. On the few occasions when I was obliged to mention it I will confess to wilfully calling it Eresus niger and hoping that the spirit of Walckenaer wouldn’t be too disturbed. However, I felt a very vaguely nagging guilt about this, and so, eventually, when looking at its picture on my blog just today I decided once and for all, to learn the correct name and spelling. So off I went to the wonders of the internet, and what do you know? Its name had changed a third time! Now, bizarrely enough, it has become Eresus sandaliatus (Martini & Goeze, 1778). That’s slightly easier to spell, but frankly, this little spider is just too quick for me. With more names than UK breeding sites it’s got so far ahead of my addled brain that I’m going to register my official surrender ” I’ll call it the Ladybird Spider and be done with it. And nuts to Martini & Goeze. (Post first published 2005; updated with new image and links)