n 5 June 1997, Matthew Chatfield was flown to Copenhagen to attend the award ceremony for the Princes' Award 1997, hosted by the European Environment Agency. The award is described as: "For the best audiovisuals on Europe's Environment". 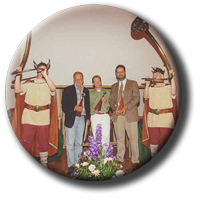 Naturenet was judged to be winner in the Multimedia Category. We got a nice trophy and a certificate, as well as a good feed and a night in Copenhagen. The trophy is a bit dented now, the kids having got at it once or twice, but we still like it, even if it does appear to be made from tropical hardwoods.

Follow this link for the archive page referring to this - the awards are now called 'The Royal Awards'.

Extract from the Jury Report

Naturenet: Matthew Chatfield / Barbara Chatfield (UK)
"One feature of the new multi-media technologies is their accessibility. It is not necessary to be a large corporation -or NGO - in order to put a message across. This web-site was attractive to the Jury for that very reason. Living quite far from a major city but making full use of the Web, its webmasters , who are volunteers, have created a friendly and fun facility which will be of interest to a wide general public and to such professionals as nature wardens and field workers. This is an original and entertaining website which encourages participation and furthers greater understanding of nature conservation issues".

What has happened since?

It would be nice to report that the award has brought Naturenet fame, fortune and good hit-rates. However, if any of those came, it wasn't because of the award. It sits on the filing cabinet and provokes a few comments from indulgent visitors. In Summer 1998 I used it to squash a wasp, and dented the little metal bit on the top. But I still feel immensely proud.

We note, also, that the 1998 Princes' Award winners won £2500 as well. Lucky things. We didn't get any cash, which makes the enjoyment of the glory all the more pure.